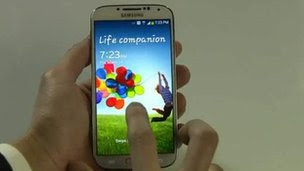 Samsung has now launched its newest smartphone the Galaxy S4, which is being made available worldwide by the end of April.
The smartphone incorporates a a 5in (12.5cm) screen featuring an interesting technology that allows users to interact and control the screen by simply using their eyes. Furthermore, the new phone is capable to take two different pictures at once.

Below is a summary of the main features of the new Samsung Galaxy S4: