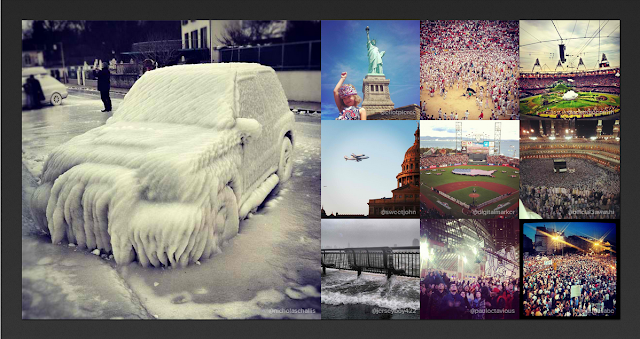 2012 has undeniably been a huge year for Instagram. In fact, after a quick glance at some of the statistics listed below it’s quite hard to say it has been anything else but its biggest to date.

And the people of Instagram must have realised this themselves. They have chosen to commemorate 2012 with the release of a ten picture compilation showing some of the world's biggest events captured by none other than their now more than 100 million users.

But before we focus on those pictures, here’s some of those facts and figures that have made it such a landmark year for the photo-blogging site.

Constant updates have been released throughout the year, including new filtration and editing capabilities making it even easier for the user to transform their stock photos.

Instagram for the Android OS was launched on April 3rd, allowing millions of extra users to join the social network.

It launched a web browser version of its site after huge public demand and added Photo Mapping GPS capabilities, allowing users to tag each picture in the place it was taken.

By far the largest development of the year however was the ‘joining’ of Facebook by Instagram. In more ‘business’ terms, it was bought by Facebook for a cool $1bn in cash and stocks back in April 2012.

Mark Zuckerberg, founder of Facebook, pledged at the time to allow the brand to develop separately and in the coming months he was as good as his word. Critics might say that the mobile interface has become more ‘Facebook like’ (colour scheme, layout, interaction etc) but the marrying of these two giants has done nothing to blunt the enthusiasm of the public.

And it is, after all, the public who make Instagram what it is today. And it is their keen eye for a picture that has made this top ten images of 2012 possible. Documenting everything from world changing politics to freak weather, the Instagram user has been at hand to capture it all. And here they are.

1. February - Severe freezing weather across Europe led to a car being apparently drenched in ice and also earned the number one spot.

2. July 4th - A little girl posing in front of, and seemingly emulating, the Statue of Liberty symbolised Independence Day and took second place.

3. July 8th - Spain’s Running of the Bulls earned third place with a virtuoso shot of the huge crowd surrounding two bulls and two men, felled by the bulls seconds before.

4. July 20th - London's opening ceremony for the 2012 Olympics was captured in a colourful photo featuring green pastures, clouds and a watermill.

5. September 20th - The final flight of the Space Shuttle Endeavour riding on the back of an airplane between Texas and California earned fifth place on the list.

6. October 26th - Taking sixth place on the list was an almost birds eye shot at the World Series at San Francisco's AT&T Park where the Giants beat the Detroit Tigers in a 4-5 victory.

7. October 27th -  Celebrating Muslims' journey to Mecca for the Hajj, a captivating photo taken by one participant shows thousands of small bodies circling the structure, the city's back dropped lights glowing in the sky above.

8. October 29th - Hurricane Sandy's descent upon the East Coast came in as number eight on the list, with a flooded bench overlooking the Hudson River from New Jersey captured with great clarity.
9. November 6th - U.S. President Barack Obama was re-elected to the White House defeating Republican challenger Mitt Romney and ninth on the list reflects the reaction to his win as seen on the street.

10. November 9th: The 300,000 people who protested against the government in Argentina's Buenos Aires is seen, the photo capturing just a sliver of the thousands of people who turned out but still earning the number ten spot.

Click the link below to view the photographs that make up this list. They make good viewing, and, to quote Instagram ‘'With 2012 coming to a close, it’s only natural to look back at the history-making events that have defined this year.' Another will follow next year, of that we can be sure.

About the Author
Reese Jones is a tech and gadget lover, a die-hard fan of iOS and console games. She started her writing venture recently and writes about everything from quick tech tips, to mobile-specific news to tech-related DIY.
Find more about her and her work at Reese+ and tweet her @r_am_jones.

World Series Season 2019 Starts in Paris on 24 April From Scale up companies to small boutique companies, the French market is filled with exciting entrepreneurs and innovation, and we are proud to announce we are partners to this event Tickets It has taken a lot of effort to create the first world venture capital summit spanning now over all continents. However, it still feels it is only a startup journey so far.   Paris 2019 Venture Capital World Summit Paris will be day one of the World Series in 2019, and as always we still have so much to do, nevertheless this season we are going as far away as Japan before ending the season at Silicon Valley in November. As an entrepreneur we learn every day, and we have no doubt #VCWS2019 will be stronger than ever. Our commitment is to support every entrepreneur and scale-up business that wants to be helped. No matter where he/she is. No matter where his/her original starting point. Entrepreneurship is an act of life itself, it
Read more