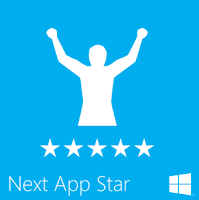 Developing for Microsoft Mobile Phone platform has quite a lot of support such Promotion on the Latest Apps, as a result there are now many apps on the  Windows Phone Store. Nevertheless, Microsoft feels it could still have more creative and innovate apps and even perhaps ground-breaking apps on its platform, with this in mind Microsoft has just created a new competition called “Next App Star” that is aimed and encouraged directly at software developers that are able to create amazing apps.

The way it works for software developers is that they are required firstly to be registered as a Windows Phone developer, then they can simply opt in which then they will be entered into the competition by March 5th, later then Microsoft will announce the chosen 64 finalists. After this process, the public will vote starting in April for the winner.

Microsoft stated “thousands of dollars in prizes for the developers of the 64 apps that get selected, including a Nokia Lumia 920 Windows Phone and a one-year free Dev Center subscription.” The prize winner will see its app featured and promoted substantially in Microsoft’s Marketing public channels.