Cartilage Can Now Be Printed on a 3D Printer 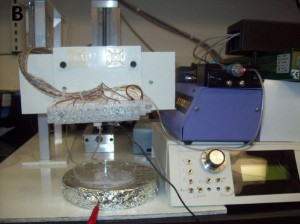 It was announced by American scientists from the Wake Forest University in North Carolina that they have developed a hybrid printer that is capable to print cartilage. It then follows that from this novel result, it may be assumed that the printed cartilage would be capable to be implanted into humans for medical reasons including re-grow cartilage.
The way scientists produced this result was by using a 3D tissue printer that consists of mixture of a typical ink jet printer combined with an electrospinning machine,  which was first seen in an article in the journal Biofabrication by the Institute of Physics.

Dr. James Yoo, author on the study stated: “This is a proof of concept study and illustrates that a combination of materials and fabrication methods generates durable implantable constructs”