Microsoft Office Available on Android and Apple Mobiles in 2013 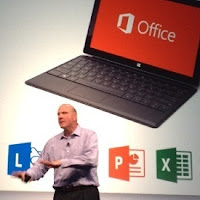 Microsoft stated "Office Mobile will work across Windows Phones, Android phones and iOS." Also in a recent development Microsoft's CEO Steve Ballmer wrote a letter that contains a vision that Microsoft is shifting its model to focus on devices and services.