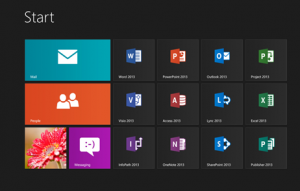 The new Microsoft version of its Office Suite labelled as Microsoft Office 2013, will also be available as Office 2013 RT for devices only. It then follows that it will be offered to customers that purchase Win RT operated devices as part of their pre-installed offerings, as a result it will not be possible to purchase the office suite as an individual product rather as a solution "included" with ARM-based Windows RT tablets. Furthermore, it will not be available at the Windows Store.

The final version of Office Home & Student 2013 RT will become available and it is expected to be sometime between November to January 2013, in the case of customers that purchase Windows RT devices before the period of the final version releases, then it is possible to upgrade to final versions for free on the normal Windows Update settings.

Below are some of the features not available at the Office 2013 RT versions: