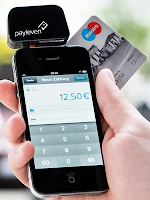 The investment internet technology group Rocket Internet, from the Samwer brothers has high hopes for Payleven, as a result today has announced that the solution is now available in the UK, Netherland, Poland and Brazil.

It appears that pay mobile technology is striving to to increase market share, particularly as smartphones are gaining ever more popularity among consumers. Furthermore, from a business perspective, in the supermarkets, shops and other pay point locations are looking for cheaper solutions that offer lower rates than the traditional terminal transactions pay at till services.

Many shops do not accept card payment for less than £5 already, and the news that in some countries such as Portugal, where a large supermarket chain announced that will not be accepting payments for less than €20 at the till when customers use card payments.

Nevertheless, following on today's news how other solution providers such as  iZettle and mPowa, how they will react is not yet clear, however we should see interesting expansion plans coming up soon, not forgetting  Square expansion.

The solution currently accepts Mastercard with Visa and American Express credit cards support coming shortly, with the "Chip & PIN” technology.  The way Payleven works is that it is on a fee per transaction, without subscription fees and no minimum turnover or fixed fee.