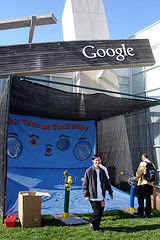 Google has made changes to google places, it has now merged with google+ its features. As a result, the new pages will now appear with a "Local tab" furthermore circles now include reviews and recommendations filtered from people within circles. In terms of innovation, it means that the traditional static places now becomes dynamic with real-time reviews which includes a rating star for businesses.

The outcome from this change means that now Google+ becomes a local search destination, which contains more powerful and interactive content with extra functionality when compared to Google.com. It can be argued that this innovation, can be similar to Foursquare functionality where users are able to filter results with predefined selections, which also includes circles. As a result, the search outcome will show a place that has been highlighted by friends. This includes reviews and posts, it is possible that later extra functionality could be included such as check-ins.