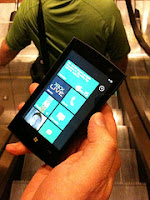 .  From the interview it was mentioned the Android rivals. It was well noted a particular emphasis with regards to Microsoft’s upcoming Windows Phone 7.  It was stated by Andy Rubin  “the world doesn’t need another platform.”

Furthermore, it was stated that the Windows Phone 7 looks “interesting” but no value is apparent, particularly when the Android system is already out there. “Android is free and open; I think the only reason you create another platform is for political reasons”.

has made clear his opinion on Android being free: it’s not free, you have to pay patent fees for it, due to Microsoft.

Rubin expands his thoughts on Android versus Windows Phone 7:

I encourage everybody to use it, but I’m also not under the impression that everybody will use it, which is a good thing, because competition is good for the consumer and if somebody has an an idea for a feature or a piece of functionality in their platform and Android doesn’t do it, great. I think it’s good to have the benefit of choice, but in the end I don’t think the world needs another platform.

It was argued that the key strength of Android lies in Google’s ability to create mashups of many services, following their cloud computing vast experience.